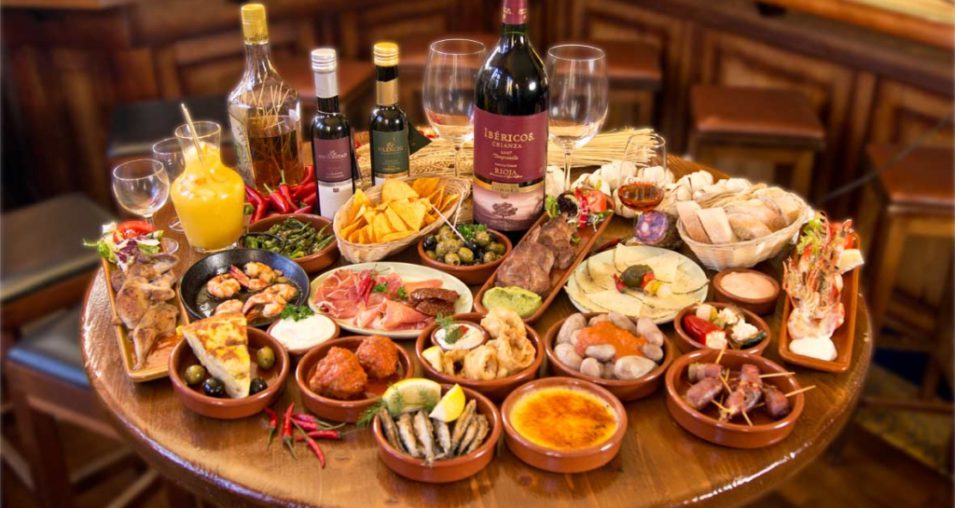 In Madrid and other parts of Spain we call tapa a small bite or snack that is served free with the drink.

One theory suggests that this custom was introduced in the 13th century when King Alfonso X ‘the Wise’ ordered taverns and inns to accompany any alcoholic drink with a small portion of solid food to avoid drunkenness. Other sources indicate that to prevent insects or dust from the streets from falling into the drink, some taverns tapaban (covered) the jugs of wine with a slice of bread, thus giving the lid its Spanish name: tapa.

There are various ways of serving: in many bars a small amount of olives, fried potatoes -type chips-, dried fruits, or a simple slice of bread with cold meats are normally served; in other establishments the tapa increases in size, quality, and sophistication to become an interesting gastronomic experience.

Besides the tapa that accompanies our drink, in many bars we can also ask for portions (raciones) or half-portions (medias raciones). These dishes, which will be chargeable, offer more food and are perfect for sharing. Some classic tapas in Madrid? The patatas bravas (fried potato wedges with spicy sauce), tortilla de patatas (typical Spanish potato omelette), croquettes, mature cheeses or Iberian cold cuts.

This busy restaurant in Malasaña, famous for its croquettes, became hugely successful after the Irish group U2 visited there years ago and had a photo session inside.

Behind a traditional red front, typical of Madrid’s old taverns, you will find a small restaurant with a bar and a few tables, where they serve homemade dishes. Croquettes are the house’s speciality and they offer different fillings: spinach, raisins and gorgonzola, minced meat, and classic ham. 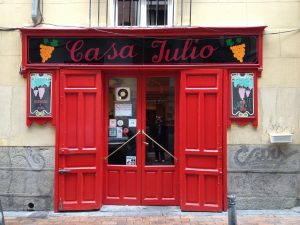 This old tavern was founded in 1860 at 12 Tetuan Street, near Puerta del Sol. Its main attraction is tapas, mainly of cod, in slices and freshly fried croquettes, but in its salon you can also enjoy cod in other preparations, in addition to typical Madrid dishes such as bull tail or tripe, various tapas, appetizers and a fine selection of wines.

The premises have retained their original decoration, with a curved façade adapted to the structure of the building and a curious glass sign with the establishment’s sign. Inside, in addition to the zinc counter and traditional marble tables, visitors can recreate the view in the graffiti and numerous sayings that allude to the history of the establishment. It has two rooms, one of which is used as a restaurant, where one can eat a la carte, and the other where meals can be taken. 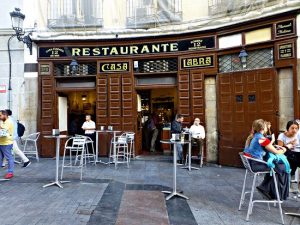 In 1892, Rafael Fernández opened several taverns called La Ardosa, in memory of the village in the province of Toledo that bears the same name. The tavern in Malasaña still retains elements of the original decoration, including the engraved glass sign, the azulejos skirting board and the fan.

The house offers a wide variety of reasonably priced Irish beers, vermouths on tap, ales and fine wines from Ribera and Rioja. Snacks include canapés of various kinds, salmorejo, salted meat and fish, cecina de León, duck ham and potato omelette. Over the years, La Ardosa has become a special place where enthusiasts learn how to enjoy beer in a different way and waiters how important the way it is served. 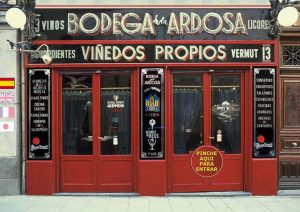 (And here you’ll find some advice about how to become a real madrileño!)

Different ways to move around Madrid and their prices

3 apps that could help you learn Spanish for free