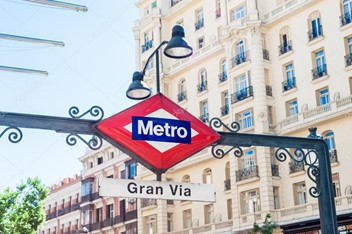 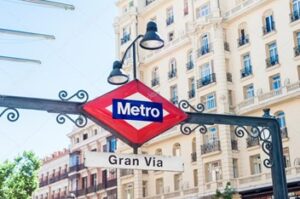 Gran Vía is a metro station on Line 5 and Line 1 of the Madrid Metro, it is located below Plazas Gran Vía and Red de San Luis in the Centro of Madrid. The station had opened in 1919 and was one of the first eight metro stations in Madrid. The station’s original name was Red de San Luis, named after the nearby square. At the time, Gran Vía Street was still under construction, but the station changed its name a year later.

From 2018 till 2021, the station underwent very big renovations and extensions, including the construction of a pedestrian tunnel to the nearby Sol station, the estimated cost of everything is €18 million. After many major delays, the station finally reopened to the public on July 16, 2021.

The station is located at Calle de la Gran Vía, 23, 28013, Madrid. The construction is a replica of the former entrance, built by architect Antonio Palacios in 1917, and it looks like the original design.

From eight stations, Metro Madrid has now grown to 300 stations of twelve Metro Lines and is one of the largest metropolitan networks in Europe.

It has several floors, 13 escalators, 4 new elevators, and it is now connected underground to the «Renfe Cercanías Sol» train network.

Gran Via also has a small museum with archaeological remains found during excavations and a ceramic mural in the lobby that represents the original entrance pavilion designed by the famous architect Antonio Palacios 100 years ago.