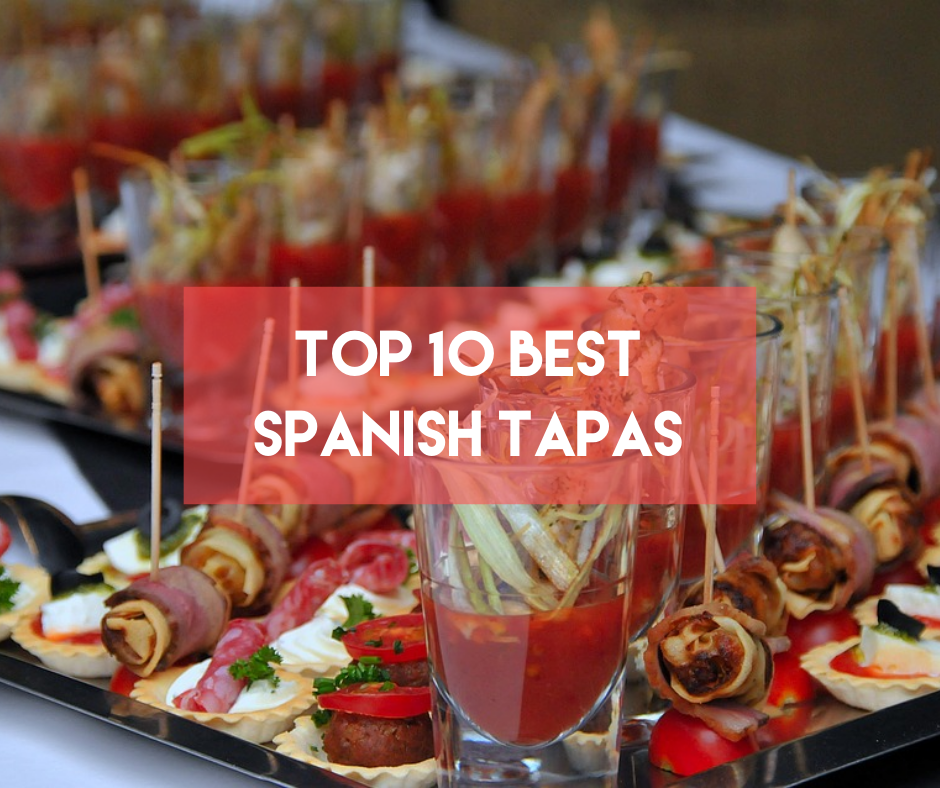 Madrid consists of many amazing places and buildings, has a great culture with kind locals, and most importantly, serves delicious food. When you are in Spain you obviously must eat tapas, but which ones are the best? Well, to save you some time answering that question, we made a list for you with the ten best Spanish tapas.

This dish is one of the most commonly served meals in Spain and is often ordered as a piece of tortilla (pincho de tortilla). It consists of eggs, potatoes, and onions, but this may be different depending on the restaurant that serves it. It is such a well known and popular dish that it even has been dubbed as the national dish of Spain by some people. It can be served both hot and cold, as a starter, addition to a salad, a filling for sandwiches and of course as tapas.

This is another very common dish in Spain. Patatas Bravas are served in bars and restaurants all over the country. The dish consists of fried potatoes covered in a tasty tomato-based sauce. The sauce was created in Madrid in 1960, but it may differ in other cities. It is originally made with tomato sauce, vinegar and chili peppers, but certain restaurants may add garlic or some other secret ingredient. The dish is called Bravas (fierce), because of the spicy taste of the sauce.

This dish is very simple, but it’s very tasty. It is one of the tapas that you can put together yourself for a last minute gathering or just for a snack. The best and tastiest combination is Spanish Chorizo and Serrano ham on a crunchy slice of bread. At certain tapas places you can also order a cheese plate which consists most of the time of a local cheese. The most well-known cheeses are Roncal (from Navarre), Manchego (from Castilla), Mahón (from the Balearic Islands), Idiazábal (from the Basque country) and Majorero (from the Canary Islands).

Croquetas are very small and very tasty tapas. Ham croquetas are the most common and traditional ones that are made, but there are also versions that contain mushrooms, squid, prawns, king crab or several types of strong cheeses. They are lightly breaded, creamy, smooth, fried, and really great combined with a glass of beer or wine. The original version of this dish was created in 1898 in France and it was made with beef. Today many European countries have their own version of the Croquetas.

This is another very simple, but very tasty dish. Calamares fritos or calamares a la romana are battered squid that are fried in olive oil, cut in rings and served hot. They are very popular in Spain and several other countries as well, such as the USA. In Madrid it is also very common to eat bocadillo de Calamares and they are served at several restaurants around Plaza Mayor.

These gambas are another very common and very popular tapas dish in Spain. The dish is easily and quickly made and is full of garlic. The gambas are marinated in olive oil with a lot of garlic and a little bit of cayenne pepper which results in a tasty dish that is slightly spicy as well. Some bars or restaurants add a little bit of paprika and brandy. Gambas al ajillo is so popular and loved in Madrid that some bars even offer it as a main course meal.

If you like mussels this treat is for you. Tigres or Mejillones Rellenos are mussels that have been stuffed, breaded and fried. The mussel meat inside is chopped and mixed with several ingredients and then the mixture is put back on one half of the shell. They are covered in bechamel and breadcrumbs and fried at the end. The dish is originally from Galicia, but is served all over Spain.

This dish consists of octopus and is served all over Spain. Traditionally, this tapas treat is from Galicia and that is why it is known as Pulpo a la gallega (Galician Octopus). The octopus is boiled and cut in pieces, seasoned with salt, sweet Spanish paprika and served with boiled potatoes on a wooden board. Often the dish is accompanied with a nice white wine or a glass of beer.

These anchovies are marinated in vinegar and are considered a very popular and traditional tapas dish in Spain. Most tapas bars will have a platter of boquerones present and it is definitely a favorite of both Spaniards and tourists. The preparation of the anchovies takes a lot of time. The fish are cleaned, then the scales are removed and put in a bath of salt and water for three hours and afterwards in vinegar for six hours. Initially, the anchovy fillets have a brown colored meat, but it slowly turns white as a reaction to the vinegar.

This tapas dish consists of meatballs that are made from minced meat, usually of veal and sometimes fish or chicken mixed with eggs and various other herbs, such as cumin, parsley, etc. There are also recipes in which the meatballs are made with seitan as a vegetarian option. Albóndigas are often served in a delicious sauce and in many different countries it is a very popular dish, which is why there are many various recipes.

These were the top 10 Spanish tapas we think you should definitely try when you are in Madrid. Hopefully, this list helped you try these delicious dishes and if you are interested in more information about some great areas where you could try these tapas, take a look at this blog post.