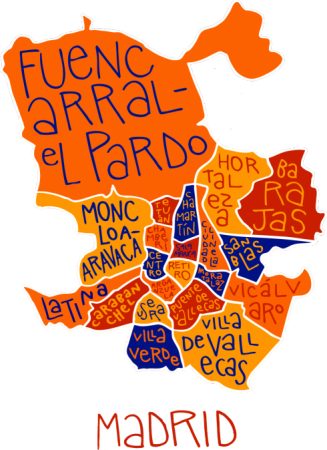 Madrid has as many faces as its many neighborhoods. And the best thing is that each one of them has something cool to offer. Here’s our top 3!

The most modern and bohemian neighborhood of Madrid is undoubtedly Malasaña. The craziest and most eccentric bars and restaurants are clustered in this area that has evolved throughout the history of Madrid. In Malasaña began the May 2nd Uprising in 1808 and, centuries later, it was the scene of the Movida, a musical revolution that flooded Madrid in the eighties.

If you are looking for something different in Madrid, Malasaña is a guarantee of a variety of restaurants, original bars and great atmosphere, especially at night, when it becomes the favorite choice of many to party in Madrid. 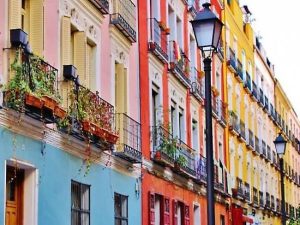 The elegant Salamanca neighborhood runs along the west side of Madrid, from Alcalá street to María de Molina. It is one of the most luxurious areas of Madrid, full of classical architecture buildings, stores, offices and embassies.

The neighborhood was developed in the second half of the nineteenth century as an expansion planned under Queen Isabella II’s rule. The designer was Málaga-born José de Salamanca y Mayol, Marquis of Salamanca. He wanted to have an area for the exclusive residence of Madrid’s aristocracy and bourgeoisie.

Serrano Street is the epicenter of the Salamanca neighborhood and one of the best areas for shopping in Madrid. Known as the «Golden Mile», it is home to the most prestigious fashion brands in the world, a true paradise for lovers of jewelry and accessories. 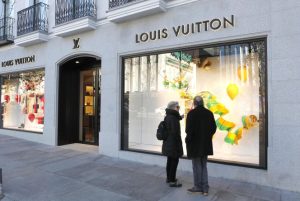 The world-famous gay district is another trendy area of Madrid. It is the site of the Pride Festival, which brings thousands of tourists every summer. Chueca is not a neighborhood as such, but an area of the Justicia neighborhood within the Centro district. It extends from Fuencarral Street, Barquillo Street, Fernando VI Street, and Santa Barbara Square, to Sagasta Street and Gran Via, and Alcala Street.

Chueca is characterized by its bustle, with people at all hours of the day: from the morning on the terraces of the square to the evening in the entertainment venues throughout the area. There are alternative stores, art galleries, bars, restaurants, museums, unique buildings, and underground establishments.

Many LGBTQ-oriented shops are located here: don’t forget to visit the historical Librería Berkana, for example, with its wide range of books and graphic novels that explore those themes.

Anyway, Chueca is far from being a ghetto: in fact, many people say that it is more like a «hetero-friendly» neighborhood!

In this trendy neighborhood of Madrid are also the Casa de las Siete Chimeneas, the Mercado de San Antón, or the Mercado de San Ildefonso, converted into cool places for show-cooking, offering take-away food, exhibitions, and restaurants of all kinds. 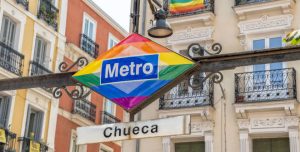 (And here‘s why Madrid is such a good choice for your studies!)

3 cool places to go with the Abono Joven