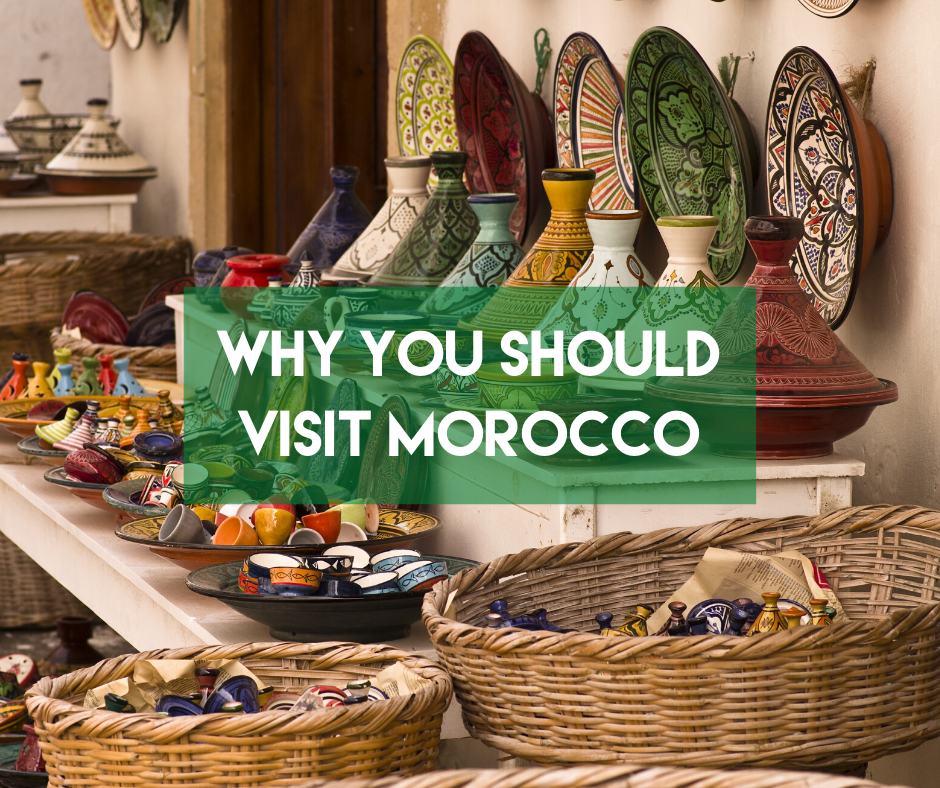 Morocco is a country full of life, culture and history. With its varied and beautiful landscapes, it is a destination worth visiting! From the north to the south, we listed what can be done and seen in this amazing country.

1)Tangier: Situated where the Atlantic ocean and the Mediterranean sea meet, Tangier, known as White City, is a port city that is always busy. The Kasbah of Tangier, that was aimed for protecting the city, is now home to the Kasbah Museum of Mediterranean Cultures. Situated on the heights of the city, the Kasbah gives you a beautiful view over the port of Tangier. In the old medina of Tangier as in other medinas, you will be enchanted by the smells and colours around you. The most important place in the Medina, the Grand Socco, is surrounded by local restaurants. This place divides the medina (oldest part of the city ) from the Ville Nouvelle (meaning “new city”).

Situated at 30 km from Tangier, the coastal town of Asilah is the perfect place to take great pictures with its pastel shades and artwork background. What we love the most about this city is the old Portuguese ramparts that surround the city.

3)Chefchaouen or the Blue City is worth visiting.The blue and white walls are not the only things that we adore about this city. Also, its mountain landscape and delicious cuisine. Get lost into its narrow streets while doing some shopping at local shops.

4)The city of Fez, that was once Morocco’s capital: has one of the biggest medinas of Morocco. The medina of Fez is a real labyrinth where mules are used as the unique medium of transportation of goods. This city is best known for its craft industry and especially for its tanneries. What we love the most about Fez are its numerous leather tanning vats. If the Royal Palace of Fez or Dar el Makhzen have to be described in one word, this would be “majestic.”  Its high golden carved  doors are very impressive. Visitors are not allowed to visit the inside of the palace, but the exterior of the palace is worth the view.

5)The city of Ouarzazate, located in the plateau of the Atlas mountains, is home to the Moroccan cinema industry. This city is sometimes called the Moroccan Hollywood, and for a good reason. International movies such as Prince of Persia: The Sands of Time (2010),Gladiator (2000) and Games of throne (2010) were shot there.

6)The Ksar Aït-ben-Haddou: is a hidden treasure in the Ouarzazate province. The earthen buildings, from which this fortified city is built, look like huge sand castles. In the highest point of the Ksar, you have an amazing view of the buildings.

7)The small village of Merzouga: On the eastern part of the country, Merzouga is a small village in the desert, and it is so far our favorite destination in Morocco. It is an oasis of peace in this lively country. We were impressed by the dazzling dunes of the Sahara desert. If you are not the type of person who likes to rest, don’t worry, you will experience the desert in a more active way. You can start slowly with a camel ride in the middle of nowhere. If you need something to get your adrenaline flowing, you can do 4×4, sandboarding or quad.

8)Marrakesh: is one the most important and modern cities of the kingdom of Morocco. The medina of Marrakesh gave the city the nickname of “Red City” because of its reddish walls. The medina of Marrakesh is an important meeting point between the Muslim and Jewish communities. Inside the medina, we loved the Bahia Palace with its carved ceiling and beautiful decorations. Get impressed by the 77 meters long minaret of the Koutoubia mosque, symbol of Marrakesh. In the Jemaa El Fna place, you will be able to get a fresh orange juice while watching (or touching for the bravest) some snakes or to take funny pictures with monkeys. If you want to buy some safran or argan oil , you should definitely have a look at the Berber Farmacy where all the products are natural. After exploring the city, you will enjoy the busy nightlife in many recognized bars and clubs.

If you want to fall in love with Morocco as we did, let us give you some tips:

1.Don’t panic! Morocco is not a dangerous country. However, we recommend you to not walk around  alone, especially during the night. Moreover, it is better to be with people to avoid getting lost. Of course, as everywhere else, pay attention to your personal belongings, especially valuable ones.

2.If you are a shopaholic, change your money in Morocco (since the exchange rates are better there), and learn how to negotiate. Some sellers may try to trick you, but others would accept to sell great souvenirs at half or even less of the first price they told you at first.

3.Keep in mind that Morocco’s climate is very diverse. While the north of the country has a Mediterranean climate, the south has a very hot and dry weather (but in the desert, the nights can be really cold). Then, you might wonder then what type of clothes you should bring with you. We recommend that you wear lightweight clothes, but to always have with you some warmer clothes. Although Morocco is not such a strong conservative country, we suggest you to wear clothes that don’t “shock” the locals. For women, to avoid being hit on by men in every corner, our advice is to cover your knees and shoulders.

Are you ready to visit Morocco?